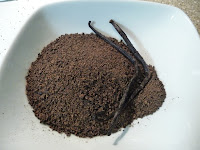 Yesterday I brewed a Chocolate Vanilla Porter that is approaching the strength of a Baltic Porter. I added a large amount of South American Cocoa that I have had for some time. I got it from family friends who brought some back from their travels. I grated two cups worth and added it directly to the kettle with one minute left in boil. That is also when I added the pulp of one vanilla bean pod. Very lightly hopped with Vanguard hops and fermented with dry Safale US-05 yeast. There is also a good quantity of flaked oats in the recipe to add a silky mouthfeel to this dessert beer.

Here is what wikipedia has to say about the history of the cacao plant. "The cacao tree is native to the Americas. It may have originated in the foothills of the Andes in the Amazon and Orinoco basins of South American where today, examples of wild cacao still can be found. How 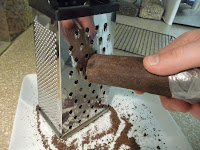 ever, it may have had a larger range in the past, evidence for which may be obscured because of its cultivation in these areas long before, as well as after, the Spanish arrived. It may have been introduced into Central America by the ancient Maya, and cultivated in Mexico by the Olmecs, then by the Toltecs and later by the Aztecs. It was a common currency throughout Mesoamerica and the Caribbean before the Spanish conquest. Cacao trees will grow in a limited geographical zone, of approximately 20 degrees to the north and south of the Equator. Nearly 70% of the world crop is grown in West Africa. Cocoa was an important commodity in Pre-Columbian Mesoamerica. Spanish chroniclers of the conquest of Mexico by Hernan Cortes relate that when Montezuma II, emperor of the Aztecs, dined he took no other beverage than chocolate, served in a golden goblet and eaten with a golden spoon. Flavored with vanilla and spices, his chocolate was whipped into a froth that dissolved in the mouth. It is reported that Montezuma II may have consumed no fewer than 50 portions each day, and 200 more by the nobles of his court. Chocolate was introduced to Europe by the Spaniards and became a popular beverage by the mid 1600s. They also introduced the cacao tree into the West Indies and the Philippines. The cacao plant was first given its botanical name by Swedish natural scientist Carolus Linnaeus in his original classification of the plant kingdom, who called it Theobroma ("food of the gods") cacao."
Posted by Unknown at Sunday, October 04, 2009