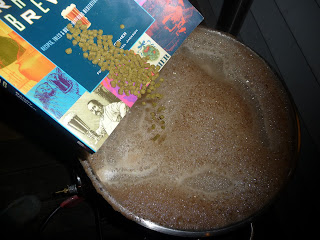 Brewing another collaborative beer with my friend and fellow brewer. We've been talking about brewing a rye IPA for awhile. Brewing late night, heating up the strike water now and hoping to get mashed in by midnight. Doesn't look good. Today's brew has pale, rye, munich, wheat, and chocolate malt. Some crystal rye for good measure. Target numbers are 15 plato, 12 lovibonds, and 50 IBU's. Finally mashed in at 12:40. Mash rest for forty minutes then mash out to 168 degrees. Quick vorlauf. Only halfway through the boil and it's 3:45 in the morning. Nice copper color with big hop character in the final wort. Pitching american ale yeast to let the ingredients shine.
Posted by Unknown at Wednesday, June 24, 2009 No comments: 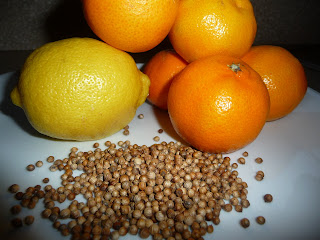 Last year I brewed a Wit beer with coriander, lemon, and whole kumquats. The grocery store was out of kumquats. So there I stand, wondering if I should still try and brew a wit today. The store had all the usual citrus fruits on hand. I didn't want any of that. Thankfully I stumbled on boxes of clementines. Never used that in brewing I thought. Using a variety of grains today. Pale malt, wheat malt, flaked oats and wheat, and some Belgian aromatic for some color and english muffin flavor. Mashed in at one hundred fifty two degrees, and rested forty five minutes. Of course some coriander was thrown into the kettle.
Of course a little something from wikipedia for a brief word about ingredients and style history. "Witbier, White beer, (French: bière blanche), or simply Witte is a barley/wheat, top-fermented beer brewed mainly in Belgium, although there are also examples in the Netherlands and elsewhere. It gets its name due to suspended yeast and wheat proteins which cause the beer to look hazy, or white, when cold. It is a descendant from those Medieval beers which were not brewed with hops, but instead flavoured and preserved with a blend of spices and other plants referred to as gruit. It therefore still uses gruit, although nowadays the gruit consists mainly of coriander, orange, bitter orange, and hops. The taste is therefore only slightly hoppish, and is very refreshing in summer. The beers have a somewhat sour taste due to the presence of lactic acid. The suspended yeast in the beer causes some continuing fermentation in the bottle. Witbier differs from other varieties of wheat beer in the use of gruit herbs. French laws (the territory 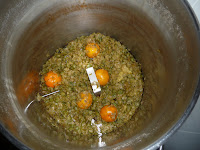 was French in the 14th century) prohibited the use of hops in gruit. Witbier can be made with raw wheat, in addition to wheat malt. Coriander grows wild over a wide area of the Near East and southern Europe, which forced Zohary and Hopf to admit that "it is hard to define exactly where this plant is wild and where it only recently established itself." Fifteen desiccated mericarps were found in the Pre-Pottery Neolithic B level of the Nahal Hemel Cave in Israel, which may be the oldest archaeological find of coriander. About half a litre of coriander mericarps were recovered from the tomb of Tutankhamun, and because this plant does not grow wild in Egypt, Zohary and Hopf interpret this find as proof that coriander was cultivated by the ancient Egyptians. The Bible mentions coriander in Exodus 16:31: "And the house of Israel began to call its name Manna: and it was round like coriander seed, and its taste was like that of flat cakes made with honey." Coriander seems to have been cultivated in Greece since at least the second millennium BC. 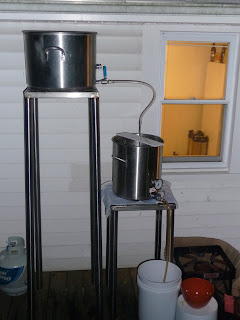 One of the Linear B tablets recovered from Pylos refers to the species as being cultivated for the manufacture of perfumes, and it appears that it was used in two forms: as a spice for its seeds and as a herb for the flavor of its leaves. This appears to be confirmed by archaeological evidence from the same period: the large quantities of the species retrieved from an Early Bronze Age layer at Sitagroi in Macedonia could point to cultivation of the species at that time. Coriander seed and leaf was very widely used in medieval cuisine. Even today, coriander seed is an important ingredient in many sausage products. Coriander was brought to the British colonies in North America in 1670 and was one of the first spices cultivated by early settlers."
As a side note to today's brew day. My friend and I built the tiered system you are looking at to the left this afternoon. Got started brewing very late. Running off at nine in the evening, nice night though. The setup is working well so far. Planning on putting burners on each stand, as well as heat/wind shields around the stands. Now just need another kettle and I can start heat up while running off. Producing faster start to finish brew day's. In the end really it equals more brewing, and isn't that what we all want. This beer turned out very well and needs to be brewed again.
Posted by Unknown at Sunday, June 14, 2009 No comments: 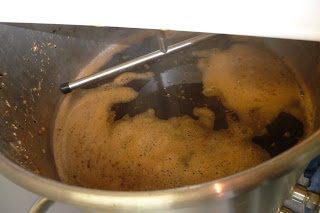 A collaborative brew day between myself and a fellow brewer. Decided on an Imperial Coffee stout as a polar star for style. Brewed with a variety of grains that were debated and discussed for hours over their attributes and shortcomings. Finally decided on eight variety's of malts. Some wheat, oats, and rye. Of course some roasted and chocolate malts. Of course some signature malts that each of us seem to use in many of our beers regardless of the style. Brewed to twenty plato. Should ferment down to four plato making a nine percent abv beer. Didn't add any coffee so far in the process. The plan is to cold brew the coffee as to not bring any of the oils out of the grinds and to not extract any astringency. Fermenting very controlled right now at sixty seven degrees.
Posted by Unknown at Wednesday, June 10, 2009 2 comments: 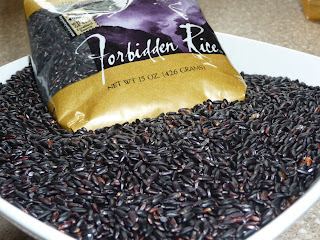 Using an exotic ingredient in today's creation. I've had a couple pounds of an heirloom rice variety around and it's time to use them. The pedia of Wiki has this to say about the rice. "Black rice is one of several black-colored heirloom plants producing rice variants such as Indonesian Black Rice, forbidden rice, or wild rice. High in nutritional value, forbidden rice is rich in iron. Unlike other black rice from Asia, it is not glutinous or rough. This grain is high in fiber and has a deep, nutty taste. Black forbidden rice is a deep black color and turns deep purple when cooked. Its dark purple color is primarily due to its high anthocyanin content." Which is a water soluable pigment. I hope the beer will have a funky color to it. I'm just using a pale base malt and the purple rice. Should be interesting, a royal beer of imperial purple color. Wiki says this about imperial purple, "The Tyrian purple (in Greek, πορφύρα, porphyra, Latin: purpura), also known as royal purple, imperial purple or imperial dye, is a purple-red dye which was first produced by the ancient Phoenicians.
Tyrian purple was expensive: the 4th-century-BC historian Theopompus reported, "Purple for dyes fetched its weight in silver at Colophon" in Asia Minor. The expense rendered purpl 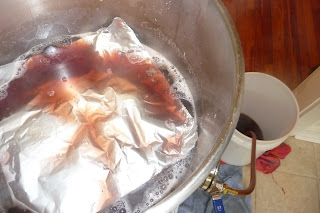 e-dyed textiles status symbols, and early sumptuary laws dictated and forbade their use. The production of shellfish purple was tightly controlled in Byzantium and subsidized by the imperial court, which restricted its use for the coloring of silks for imperial use, so that a particularly elite member of the imperial family was porphyrogenitos, "born in the purple"."
Crazy humans. 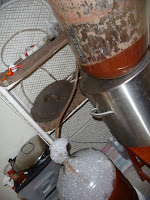 Well, I gently crushed the rice in the mill and cooked it as per the directions on the bag. Then added cooked rice to mash during mash in. Rested at 150 for an hour. Crazy deep purple color. Staining the wooden spoon I'm stirring the rice with. Great runoff, low turbidity. A deep purple color to say the least. Going to be a funny beer to pour.