Before beer it was hard cider that was the preferred beverage by the drinking (working) class in America. In the 17th-18th century cereal grains let a lone malted grains were not in abundance in the 'New World'. Thus apple cider with added sugar (brown sugar, molasses) was the most popular beverage. This is probably when American 'Apple Jack' was discovered by leaving barrels outside when an unexpected New England cold snap rushes through the valley and freezes the cider (freeze distillation).

I've enjoyed hard cider from time to time. My first hard cider I drank was Cider Jack in the 90's, Cider Jack has been said to be the first cider that "surfed the microbrew wave" in the 90's. With craft brewing sales up and brewery's in planning reaching unprecedented levels hard Cider once again is selling well. See AdAge, in Australia, and poetically by the New York Times.  It's easy to see that cider is an easy transition for a white wine drinker. American brewers are even getting in on the cider action as seen by Harpoon and now Sam Adams with Angry Orchard. Here's a list of cider brands currently being sold in the US. 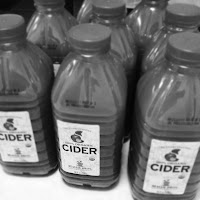 This is my first attempt at making hard cider. I went to my local orchard and picked up 6 gallons of fresh juice and local honey. Came home poured it all in a sanitized glass carboy and pitched a packet of US-05 and added yeast nutrient. How different can it be from brewing beer... During fermentation lots of sulphurous egg-y smells were being kicked off. Many time if you smell this during beer fermentation it's a sign of unhealthy yeast. My hopes were not high. After fermentation completed and I racked the cider to secondary to sample was a sulphur mess. It did not fade with time. At this point what I suspect happened after talking with other fermentation artists is that the un-heated cider and honey may have contained wild yeast which may or may not be well suited for creating a delicious beverage. This cider could be referred to as hashtag fail #fail. 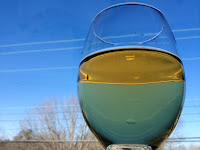 Take two... The plan this time was to heat the cider and honey then cool and knockout into a glass carboy like I would when brewing. Light simmer for five minutes with yeast nutrient. Then pitched US-05 yeast. Starting gravity of 10*plato. Expected abv of 4%. Fermentation smelled like apple honey butter. Racked to secondary and it was all right. This has since been kegged and back sweetened with honey. Crystal clear, light strawbale color. The keg will probably last awhile, but I guess hard cider can be a nice change of pace at times.
Posted by Unknown at Monday, February 27, 2012 1 comment: