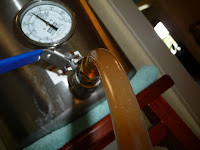 Started this nice Wednesday morning mashing in a grist bill for a robust brown ale. Brewed with pale 2 row malt, toasted rye flakes, crystal rye malt, coffee malt, and chocolate malt. The toasted rye flakes make up 25% of the grist which will add texture to the mouth feel. By mashing in at a range of 152 to 156 your promoting enzyme activity that will create dextrins, which are sugars that aren't fermentable and will be left after fermentation. These dextrins are very important in overall mouth feel of the beer. If your all grain beers taste thin try mashing in warmer and add a half pound of cara pils to the grist bill.

As Randy Mosher says in his book Radical Brewing, "Poor unloved brown ale." in the modern world brown ales take a back seat to the casual beer drinker and beer geeks styl 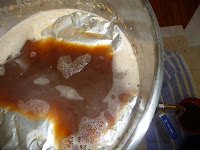 e of choice. It's not the most beautiful to look at. Doesn't have the golden, copper, amber hues you can see through or the opaque black of night stout to get lost in. Brown ales may range in color from just barely brown to near black. They also range in alcohol and hop levels. The one thing most all browns have in common is a toasted malt character. Maillard reactions are wonderful. You know when you grill a steak or toast bread and the outside browns to a golden brown, that's maillard reaction in action. Maltsters do the same thing to malted barley and then brewers can use a little crystal, chocolate, biscuit malt, etc. to create beers of different colors and flavors. So, who doesn't like bread more when it's toasted? Then go try some brown ales.

The history of the brown ale is longer than that of today's clear/filtered beer. For the most part all the ales quaffed back in 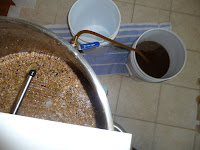 day were brown in color more or less. Mostly because people weren't drinking their beverages out of much glass so the appearance of it didn't matter. Malting techniques in the 19th century changed the color of beers forever though. Now you could use just pale/pilsner malt and get a bright golden ale to behold. Before this ales, especially in England, were being made with 100% Amber and brown malt. As technology improved, recipes changed to the point where brewers were using base malt and a little black patent malt to create the color desired. This is seen clearly in the evolution of the porter style in London. These two beers, one all amber/brown malt and one base malt and a little black may look the same but surely don't taste it.

Here is what wikipedia says about brown ales. "Brown ale is a style of beer with a dark amber or brown colour. The term brown beer was first used by London brewers in the late 1600s to describe their products, such as mild ale. Though the term had a rather different meaning than it does today. 18th-century Brown Ales were lightly-hopped and brewed from 100% brown malt. Today there are brown ales made in several regions, most notably England, Belgium, and North America. Beers termed brown ale include sweet, low alcohol beers such as Manns Original Brown Ale, medium strength amber beers of moderate bitterness. In the 18th century, Brown Ales were brewed to a variety of strengths, with gravities ranging from around 1060º to 1090º. These beers died out around 1800 as brewers moved away from using brown malt as a base. Pale malt, being cheaper because of its higher yield, was used as a base for all beers, including Porter and Stout. The term "Brown Ale" was revived at the end of the 19th century when London brewer Mann introduced a beer with that name. However, the style only became widely-brewed in the 1920s. The Brown Ales of this period were considerably stronger than most modern English versions. In 1926, Mann's Brown Ale had a gravity of 1043º and an ABV of around 4%. Whitbread Double Brown was even stronger, 1054º and more than 5% ABV. The introduction of these beers coincided with a big increase in demand for bottled beer in the UK. In the 1930's some breweries, such as Whitbread, introduced a second weaker and cheaper Brown Ale that was sometimes just a sweetened version of dark Mild. These beers had a gravity of around 1037º. After WW II, stronger Brown Ales, with the exception of a handful of examples from the North East of England, mostly died out. The majority were in the range 1030-1035º, or around 3% ABV, much like Mann's Brown Ale today.North American brown ales trace their heritage to American home brewing adaptations of certain northern English beers."
Posted by Unknown at Wednesday, May 13, 2009