This is definitely a batch to file under experimental. A porter designed to pair with a well seared and seasoned steak. Where the golden brown toasted bread and chocolate flavors of a Porter are blended with the licorice flavor of the Fennel Seeds and unique flavor of Smoked Paprika creating a one of a kind Porter. The fennel seeds were toasted in the oven for twenty minutes before being crushed in 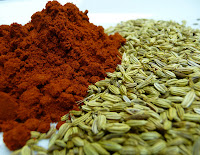 a mortar and pestle. 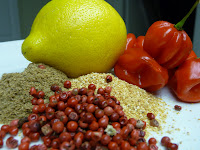 Very excited to brew up another batch of this beer because people really liked it. A family friend proclaimed it was like an "Explosion!" of flavor. A group of chefs tried this beer and really enjoyed the heat and were excited to cook Mussels with it. I first brewed White Heat in November 2009 in great esteem for chefs worldwide and Marco Pierre White in particular. Many of my beers are inspired by different chefs cooking styles and flavors from around the world. Where I try to blend unique spices into complementary beer styles to create new beer and food pairings. This beer is perfect for seafood and tacos, and I wouldn't even be offended if someone asked for a lime with it. 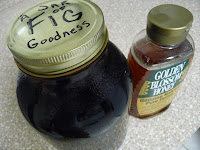 In my riff on the style today I'll be adding honey which will add gravity to the beer while the Figs will enhance the raisin and toffee malt flavors derived from the specialty malts used in the grist bill. I brewed a Belgian style Dubbel in April of 2009 (post has more history about the style). The beer was okay with nice ale fruit flavors and slightly phenolic, but finished too dry and was too thin to be a good Dubbel. So I've added over a pound 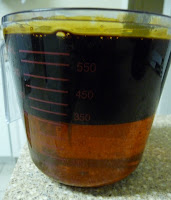 of Weyermann Carahell malt as well as some CaraPils to the grist bill to provide unfermentable sugars to the wort thus creating more body in the finished beer. I'll also be mashing in warmer, 155*f, which also provides more body to the finished beer compared to mashing in at a lower temperature, 148*f for example. Even just a few degrees difference (149f-156*f, dry to sweet) in mash rest will affect your final gravity by at least half a degree Plato. So when planning a recipe remember that your mash rest temperature is another tool that can be used in creating the flavors your after in the final beer.
Recipe: American Pale Malt, Munich Malt, CaraMunich, CaraHell, CaraPils, Dark Crystal Malt, and Chocolate Malt. Hopped with Super Galena to balance. Fermented with White Labs WLP550 Belgain Ale yeast from A'Chouffe brewery in Belgium.
Posted by Unknown at Sunday, September 26, 2010 No comments:

Today's batch is an Imperial Amber ale. A 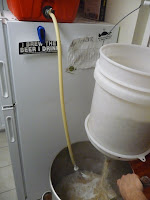 style that's basically a pumped up version of an American Amber Ale in the same way a Double IPA is scaled up version of an IPA. More malt means bigger flavors and higher alcohol levels. More hops mean a bigger hop bitterness, flavor and aroma. A bigger, bolder Amber with emphasis on dark malt flavors and huge hop character. One of my favorite Imperial Amber Ales is Flying Mouflan by Troegs Brewing. On the dark side of the style but recently won a gold medal at GABF 2010.

Was going to brew an American Pale ale tonight but decided to blend in some darker malts to create a bready Amber Ale with a pronounced hop aroma and flavor. Not an overly exciting style but you can find an example of one at nearly every brewpub in America. The darker malt character helps to carry the style to gateway craft beer drinkers. An American Pale ale can many times be noticeable bitter to the drinkers palette. While an 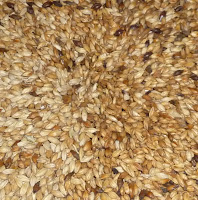 Amber ale, although many times brewed with higher IBU's, is greatly enjoyed. The darker malts help to blend and hide an otherwise surprising hop flavor to the new craft drinker. This amber ale will have a noticeable hop flavor and aroma though. So, some drinking experience is required for this Amber.

A style of beer resurrected by an early craft beer pioneer Fritz Maytag, who recently did an interview for Reason magazine. The style of beer that was resurrected was Steam Beer of Anchor Brewing who has trademark rights to be the only brewery to be able to call it Steam Beer. If another brewery makes this style they call it a 'Common'. Common beers are a hybrid style that's fermented with a lager yeast strain but at a higher temperatures. Most lager yeast strains ferment at less than 55*f 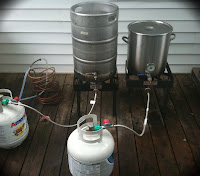 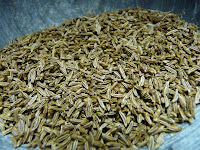 The first time I brewed this beer I brewed 150 gallons of it at the Dogfish Pub while I was working as a brewer at the production brewery in Milton, DE. When it was my turn to brew at the pub I went through my research and development folder and looked at my list of styles and beers I was planning on brewing at home. A porter brewed with caraway seeds and rye malt inspired by Rye Bread was half way down the list. I decided this would be a fun one off for the pub that I called Daily Wry. Overall I was happy with the finished beer and it's reviews. To make this beer better I'm going to try and get a more pronounced flavor from the caraway seeds. Adding a half ounce of crushed caraway seeds at end of boil might do the trick. We'll see. Also first wort hopped this batch with Hallertau Hersbrucker which I've found lends a peppery flavor which will complement this brew.
Posted by Unknown at Sunday, September 12, 2010 2 comments:

Brewing an easy drinking Belgian style pale ale today. Using White Labs WLP550 yeast. A versatile strain that ferments wort into an array of delicious beers. A blend of Slovenia Celeia, Styrian Goldings, and Centennial hops will create a floral bouquet of aromas to accompany the spicy Belgian yeast. With a slighty toasted, biscuit finish in the malt flavor. I'll probably be dry hopping this beer but will decide when I rack to secondary. Looking forward to this batch being on draught.
Posted by Unknown at Sunday, September 12, 2010 No comments:

Brewing a collaborative recipe today with my good friend Brent Baughman. He's moving to Portland in a few weeks to continue his brewing adventures and if anyone is looking for a 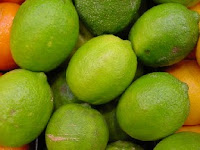 damn good veteran brewer they should hire him. We began taking stock of what was available to brew with. With the yeast selection (chico, lager, hefe, and two wit strains) on hand we decided to brew a Belgian style White beer with fresh Lime peel instead of the traditional curacao orange peel. A small twist on a classic style. We used the zest of three limes and a half cup of lime juice added at the end of boil as well as the ground coriander. Fermented with Wyeast 3463 Forbidden Fruit yeast strain for a classic wit biere flavor profile.
Posted by Unknown at Saturday, September 04, 2010 2 comments: