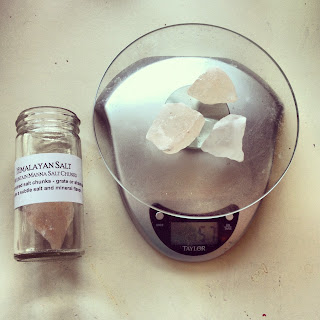 Finally brewed a batch at our new house. The last batch I brewed was back in October. Seems like a very long time ago.  My focus has been on starting Burlington Beer Co. Trying to find a location has been frustrating to say the least. My wife and I bought a house built in 1931 with many recent updates over the last five years by the previous owners. We have an acre of land and we are very excited to have space for a garden again. I'll be building quite a few raised beds this spring. Back to the details of this latest batch. 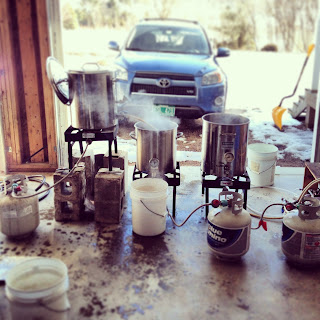 It's my first time brewing a Gose style beer. A traditional sour German wheat beer. This recipe idea is my wife's. She enjoys commercial examples of Gose style beers and wanted me to brew one. For the salt we used a pink Himalayan salt. The pepper was pink peppercorns. For the six gallon batch I used thirty grams of salt. Based off the Mad Fermentationist's Gose where he used fifteen grams for five gallons and said he would double the quantity for the next batch. 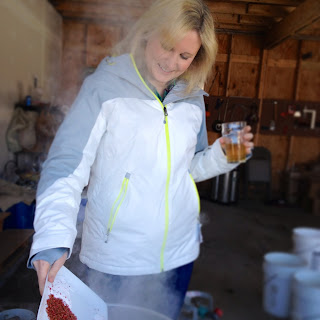 Fairly simple grist bill. Over fifty percent wheat malt. Barley malt, flaked wheat, and acidulated malt round out the grist bill. The acidulated malt will add some tartness. I'd like to inoculate this beer with some lactobacillus, but I need this batch ready in a month so I'll probably be adding a couple ounces of lactic acid to the keg. I feel like it's cheating, but using lactic acid is a quick, sanitary method to sour a beer. I've used plenty of food grade lactic acid in my professional brewing career. Pumping fifty five gallon drums of lactic acid into the whirlopool for Festina Peche when I brewed at Dogfish Head.. All the sourness for that beer comes from food grade lactic acid. For my Gose today I added ten international bittering units of hops at the beginning of boil. This batch is being fermented with Wyeast 1010 American Wheat. The strain should produce a slightly tart, crisp, low ester ale. 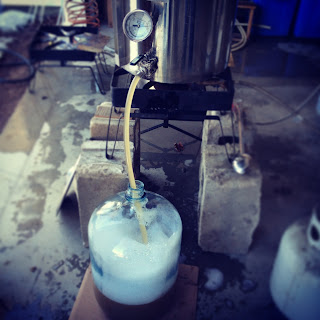 The starting gravity is eleven degrees plato (1.044 SG). This should produce a low alcohol ale that's crisp, but have a fuller mouth feel from all the salt added at the end of boil. Another cool part about this batch is that we have well water at our house. This is my first time brewing with well water. I decided not to filter the water and just brew as is. It will be hard to tell what impact the well water has on this batch because I added so much salt. I'll be brewing a low gravity IPA Tuesday and that batch should be a better indicator of the impact of the well water. I may send out the water for lab samples, but my focus is still on building Burlington Beer Co. It's an uphill battle, but it's a battle worth fighting for.
Posted by Unknown at Sunday, March 10, 2013