Brewing an ale in the Gruit tradition. Before hops were commonplace in beer, Gruit was the traditional name for cereal grain fermented beverages where spices, herbs, and roots were used to flavor and add the needed bitter counterpoint to what would otherwise be a cloyingly sweet fermented cereal grain beverage. Where wine has the bitter counterpoint of tannins from the skins of the grapes, beer and gruit need to have hops, herbs, spices, and roots to balance out the beverage. Some traditional Gruit herbs and spices are yarrow, mugwort, myrica gale, wild rosemary, juniper berries, horehound, and heather. In terms of the history of "beer" hops are relatively new. Cereal grain fermented beverages have been produced, to the best of our discovered knowledge since 4000-5000 BCE with origins in the fertile crescent. Hops have only been used in the production of beer for the last 400-500 years. 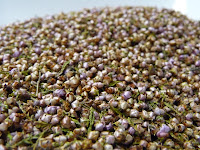 The best way to understand the flavors of spices and herbs is to steep them much the same way you make tea. Heat water to a boil then pour over whatever traditional gruit spice or herb you are interested in using. Let steep for one to five minutes. Then smell and taste what is going on. Make notes of each spice and herb. Some gruit spices and herbs are better utilized for there bitterness, while others for there aroma and flavor. Figuring out when to add them during boil is probably the most difficult part next to how much to add. Unlike hops where you can calculate alpha acid content by utilization rates during boil there isn't a spreadsheet to figure out how much mugwort will give you your desired bittering units. Use your senses when you make teas, try to understand how much bitterness, flavor, and aroma each spice and herb you plan to use provides. Adding an ounce of the more bitter herbs and spices with five minutes left in the boil may have the same effect of adding an ounce of five percent alpha acid hops at the start of a sixty minute boil. For me the exciting part about brewing with herbs and spices is discovering the flavors of the spices and herbs that hops can't provide to fermented beverages. Play around with your favorite spices whether it's chamomile, licorice, or meadowsweet anything is possible in gruit (or beer as we call it today). A great website for further inspiration is GruitAle.com

Recipe: American Two Row, Munich Malt, Briess Extra Special Roast, and Roasted Barley. Barely hopped with Celeia. With Heather flowers added near the end of boil and at the end of boil for flavor and aroma. Fermented with Wyeast 1318 London III.
Posted by Unknown at Sunday, August 22, 2010