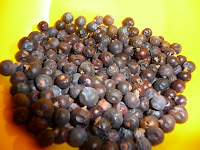 Inspired by the Juniper beers of Finland. Refered to as 'Sahti'. Wikipedia has this to say about the style. "Sahti is a traditional beer from Finland made from a variety of grains, malted and unmalted, including barley, rye, wheat, and oats; sometimes bread made from these grains is fermented instead of malt itself. Traditionally the beer is flavored with juniper berries in addition to, or instead of, hops; the mash is filtered through juniper twigs through a trough shaped tun called a kuurna in Finnish. Sahti has a distinct banana flavor due 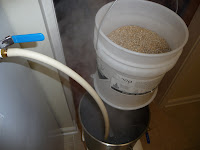 to the yeast. Sahti is a top-fermented brew (ale), and while baking yeast has been used traditionally, ale yeast may also be used in fermenting.
The end product is a cloudy, mildly alcoholic beer with yeasty and phenolic flavors and distinct taste similar to banana. Sahti is traditionally home brewed but in recent years commercial versions have become available."

My version has barley, rye, and wheat malts. Some crystal rye for color. Brewed to 17.5 plato. Final abv should be around seven and a half. In this batch I'm using a neutral yeast strain instead of the phenolic 'banana' strain talked about above. I want the peppery rye malt and juniper flavor to come through, with a clean malt backbone. The final beer should take some time to age. This is second batch of a Juniper Rye beer I've brewed based of Randy Mosher's Sahti recipe. Racked the beer out of the primary fermentation vessel seven days after brewing. The krausen had fallen and thinned. The yeast became to settle in layers at the bottom. It was time to rack. If you leave beer on top of the yeast bed, especially in home brewing the yeast could begin to autolyze. Literally meaning the yeast begins to cannibalize itself which causes an array of issues. 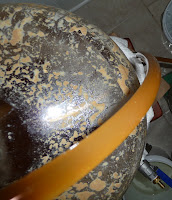 The beer itself tasted pretty good thus far. Strong pine, juniper gin smell and flavor. Oily mouth feel from the spices that does fade with time. I'll keep this beer in secondary FV for 5-10 days. Then either bottle or keg, probably keg. Racked into keg today 5/11. The taste is very piney, with a stong juniper, dry gin character.
Posted by Unknown at Friday, April 24, 2009