The complexity in the best examples of this style of beer called the "Burgundy of Belgium" by BJCP is nearly sublime. A red ale fermented with a plethora of different yeasts and bacteria such as Brettanomyces, Lactobicillus, and Pediococcus. This is done to create sour beers ranging from lightly tart to full on pucker face. The sourness comes from the lactic and acetic acid produced from these acetobacters that convert ethanol into aforementioned acids. Where as usual brewers yeast ferments from start to finish (for the most part) in less than two weeks it can take up to at 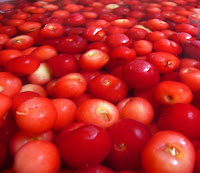 least 6 months or more until there is a noticeable sourness in the beer, many times aged up to two years. Putting patience to task and creating an opportunity to blend different aged beers in the souring process to hit a desired flavor profile you're looking for. Blending young and 'old' beer for not only consistency but to balance the vinous flavor, sourness, and fruitiness (cherry pie, plum, and red currant flavors are desired) in the final beer.

For my first attempt at this style of beer I'll be using Wyeast Roeselare Blend which has brewers yeast, sherry yeast, and myriad of souring bacteria (as talked about above) to achieve the complex flavors in this style of beer. The Wyeast website suggests that it takes 18 months of aging to achieve desired flavor profile. Is it sour yet?