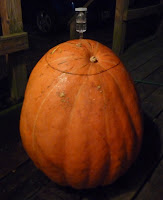 A pumpkin ale fermented inside a pumpkin A collaboration ale with fellow brewer Jon Talkington of Brimming Horn Meadery. This idea of doing this is goofy and mad. Some restraint was used. We sulfited the inside of the pumpkin after cleaning out the seeds. I guess it was as sanitary as the inside of a pumpkin could be. We roasted fou 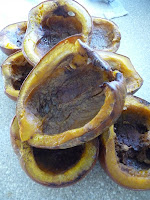 r small sweeter variety pumpkins with spices that yielded 6.4 pounds of cooked meat. In the mash was pale malt, dark munich, wheat malt, amber malt, crystal, and coffee malt. Along with the cooked pumpkin meat. We decided to do a step mash to convert more of the starches in the pumpkin. Mashing in at 124 F, rest for twenty minutes. Then brought temperature of mash up over direct heat while stirring to prevent hot spots. Rested again at 149 F for one hour before finally mashing out to 168 F. Durin 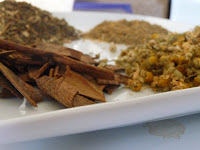 g vorlauf the wort cleared up surprisingly fast. Began collecting wort and sparging and even with the 1/2 pound of rice hulls in the mash the bed collapsed and the runoff stopped. No surprise really with all that pumpkin meat in there. Stirred mash and ran off rest no problem. The wort was lightly hopped at sixty minutes for 15 IBU's. With five minutes left in boil we added meadow sweet, chamomile, real cinnamon bark, and two pounds of brown 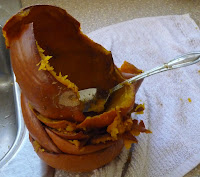 sugar. Cooled the wort down and knocked out in to a pumpkin. Would have liked to seal the top with wax but didn't have any so just taped it with packing tape. I'm really excited to see how this turns out. Whether the final beer is good or bad it's been a fun brew so far.
Pumpkins were an early sugar source in colonial America for fermented beverages. From the blog Beer Living it states. 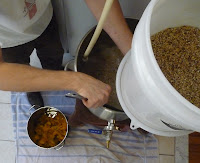 "From some of the books (Google books is great for searching these old books!) describing beer in colonial times, it seems like Pumpkin beer was not that unusual. During different times malted barley would be in short supply so the colonial brewers would use a wide assortment of whatever organic ingredient was handy. Pumpkin was in abundance so it was probably one of the most common of the ingredients. One reference to pumpkin beer was from the 1863 book “History of Hadley” by Sylvester Judd: “In Hadley, around 1800, 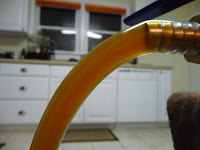 beer was generally brewed once a week; malt, hops, dried pumpkin, dried apple parings and sometime rye bran, birch twigs and other things were put into the brewing kettle and the liquor was strained through a sieve. This beer was used at home and was carried into the fields by the farmers. “It also seems that pumpkin beer was an in 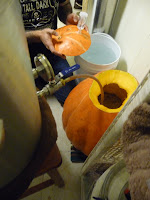 gredient to making a very popular drink of the day, the ‘Flip’. From the 1919 book ‘“Colonial Folkways” by Charles McClean Andrews, there is a reference to using Pumpkin Beer to make a very common drink of the time, the ’Flip’:“Flip was made in different ways, but a common variety was a mixture of rum, pumpkin beer, and brown sugar into which a red hot poker had been plunged” American flip was made in a great pewter mug or earthen pitcher filled two-thirds full of beer; sweetened with sugar, molasses, or dried pumpkin, according to individual taste or capabilities; and flavored with “a dash” of rum. Into this mixture was thrust and stirred a red-hot loggerhead, made of iron and shaped like a poker, and the seething iron made the liquor foam and bubble and gave it the burnt, bitter taste so dearly loved."
Posted by Unknown at Tuesday, October 13, 2009