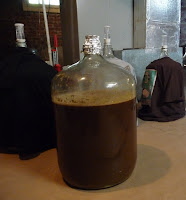 Randy Mosher in Radical Brewing describes Roggenbier as, "By simply substituting rye malt for half the wheat in the weizen recipe and tossing in a half pound of crystal of your choosing, you can make a delightfully spicy rye beer." BeerAdvocate describes the style as "A traditional German style rye beer that typically contains very large portions of rye. Expect a very pronounced spiciness and sour-like rye character, malty flavor, and a clean hop character. Often unfiltered and bottl 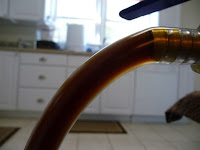 e-conditioned, Roggenbiers tend to be rather turbid and foamy."
I'm going to just leave the wheat malt out of the recipe all together and do 40/60 with rye malt and pale malt. The specialty's are crystal rye, amber malt, and a little black patent. Going to ferment on 2nd generation Safbrew T-58. This yeast will accentuate the pepper spice of the rye instead of using the more traditional weizen yeast.
Posted by Unknown at Friday, October 09, 2009