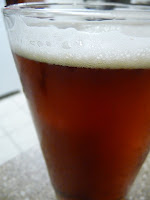 Brewing up an easy drinking Copper ale tonight. Brewed with 24% Biscuitmalt to give this brew a bold bready character. Commercial examples of this 'style' of beer are Otter Creek's Copper Ale and New Belgium's Fat Tire. Both are very biscuity, malty, well balanced ales with enough hops to hold up to the malt but not overpower it. A style of beer that doesn't really have a category. It's American but doesn't have the American citrus hop character that Category 10 American Ales have. Copper ales are similar to German Alt beers but the yeast character in American Copper ales contributes more flavor than a traditional German Alt beers yeast that has a cleaner, lager like yeast characteristics.