After working with and living with my house mate, who is also a professional brewer, for over a year now we haven't done a collaborative brew yet. Which is kind of ridiculous. We're brewing an Abbey style ale with Citra hops and dried orange slices. A blonde 7% 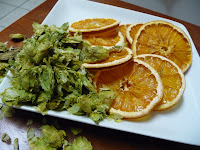