Happy New Year! Good to be back brewing after a great holiday. First brew of the new year will be inspired by the pre-prohibition style lager. My cellar is at 49f, a little warmer than I would like but I don't think it's going to get much colder down in the cellar. This style was created by German immigrants in the late 19th century. Using German brewing techniques, German lager yeast and American ingredients (six row barley, maize, rice, and Native American hop variety's). 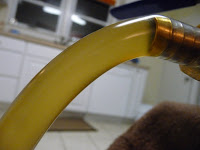 My version today will be brewed with American two row, German pilsner malt, basmati rice, and wheat malt. Hopped with a heavy hand, for the style, of continental hops.

BJCP describes the style as, "History: A version of Pilsner brewed in the USA by immigrant German brewers who brought the process and yeast with them when they settled in America. They worked with the ingredients that were native to America to create a unique version of the original Pilsner. This style died out after Prohibition but was resurrected as a home-brewed style by advocates of the hobby.
Posted by Unknown at Monday, January 11, 2010