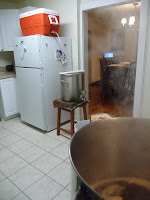 Beer Judge Certification Program's overall impression and comments of style 15C, "a strong, malty, fruity, wheat based ale combining the best flavors of a dunkel-weizen and the rich strength and body of a bock." "A dunkel-weizen beer brewed to bock or doppelbock strength. Now also made in the Eisbock style as a specialty beer. Bottles may be gent 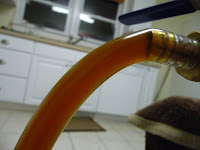 ly rolled or swirled prior to serving to rouse the yeast." BJCP claims, "Aventinus, the world's oldest top-fermented wheat doppelbock was created in 1907 at the Weisse Brauhaus in Munich using the 'Methode Champenoise' with fresh yeast sediment on the bottom. It was Schneider's creative response to bottom-fermenting doppelbocks that developed a strong following during these times"

The grist is made up of German pilsner malt, munich malt, wheat malt, Special B, crystal 80, and chocolate malt. I won't be doing a traditional triple decoction brewing today, but will be doing a step mash and caramelizing the first gallon of first runnings. To, in theory make up for the lost nuances of decoction brewing.
Posted by Unknown at Tuesday, December 15, 2009