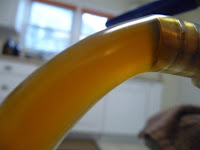 BJCP states this about the style, "The traditional style of beer from Dusseldorf. Alt refers to the "old" style of brewing (ie., making top-fermented ales) that was common before lager brewing became the popular. Predates the isolation of bottom-fermenting yeast strains, though it approximates many characteristics of lager beer. The best examples can be found in brewpubs in the Altstadt ("Old town") section of Dusseldorf."

Grist bill today: German pilsner malt, dark Munich malt, and cara Munich III. Hopped with whole leaf Glacier hops and Vanguard hops to 20 IBU's. Fermenting with dry yeast K-97. Kind of it sounds like Wyeast 1007 but then the comment about being able to make Belgian wheat beers is kind of strange. The yeast, K-97, has a wide fermentation range (59f-72f). Reminds me of S-33 "edme" strain, where the temperature you ferment at has a major impact on ester production. Meaning whether it tastes like a 'Belgian' (high temp.+70f) or like a fruity English ale (lower temp.-68f). I'll be fermenting this altbier in the low 60's to keep ester levels low. I've never used K-97 so we'll see how it goes.
Posted by Unknown at Sunday, January 17, 2010

Email ThisBlogThis!Share to TwitterShare to FacebookShare to Pinterest
Labels: Altbier