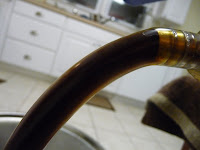 Peter at Simply beer contacted a group of home brew bloggers to have a cross country brew off on the same day, Sunday the 13th of December 2009, to brew a stout. The concept is for us all to brew the same stout recipe and we each to change one thing. This could be a regional ingredient, a grain, a hop, spices, chocolate, chilies, anything. My changes are going to come a little out of necessity. I wasn't able to get to my local home brew store this weekend, which is only open on Saturday's. In short I don't have flaked barley or tettnanger hops. Instead of the flaked barley I'm going to toast 4 oz. of flaked oats instead. To me that is my "one" change to the recipe, a grain and extra process change.
For the tettnanger I'm just going to substitute glacier hops (I hope this is okay with everyone involved)by doing an alpha acids substitution calculation.
(AAU% of hop in recipe*weight)/AAU%=weight of hop substituting with
So in this case I'm substituting Glacier 5.5%AAU for the Tettnanger 4.0%AAU that 's in the recipe.
(.04*1 oz)/.055=.72 oz Glacier
Simply Beer blog explains what were up to, "I(Peter of Simply Beer) came up with this idea a couple months back. I’m not entirely sure what dark unused part of my brain it was spawned from, but has been warmly received from the Beer Blogger’s I’ve approached about it. Basically the idea stemmed from seeing my fellow bloggers tweeting about brewing beer. It seems to me, you get a deeper understanding of beer when you make your own. But I digress, since I’ve been doing the Beer Brawl™ podcasts, reviewing beers, and brewing them, I thought it would be fun to combine it all together! So, I enlisted the help of some beer bloggers you probably know…
Aaron – Captain’s Chair(@captainschair)
Derek – Luther Public House(@LutherHaus)
Erik – Top Fermented(@topfermented)
Ethan – Geek Beer (@geekbeer)
Joseph – Hopfentreader (@hopfentreader)
Michael – Thank Heaven For Beer (@heavenlybrew)
Nate – Thank Heaven For Beer (@THFBeer_nate)
Peter – Simply Beer (@simplybeer)
Thomas – Beer Genome Progect (@TomBGP)
So what is the “Beer Bloggers Brew-off“?
We are all going to brew the same base Stout recipe with the same time frame, but we all get to change ONE thing about the recipe, our secret ingredient. The secret ingredient can be anything, as long as the 5 gallon batch is completed on time. Once the batch of beer is bottled, we’ll ship each other a couple bottles of our Stout and we do a virtual tasting. I will record a podcast for all to hear. Sounds cool, huh?
The recipe:
9 lbs. Domestic 2-Row barley
16 oz. Chocolate Malt
16 oz. Roasted Barley
4 oz. Flaked Barley
4 oz. Caramel 60°L


American Ale Yeast (wyeast 1056)
base recipe has estimated gravity of ~1.046 and finish around 1.014.
The Schedule:
Brew day will be December 13th, Beer bottled on January 10th, 3 bottles of Beer shipped to each of us on Feb 1st Tasting on Fri Feb 12th(subject to change) Very simple! I’m excited to see what these accomplished home brewers can put together. I’m sure it is going to be 6 exceptional brews that we’ll be tasting February."
Posted by Unknown at Sunday, December 13, 2009