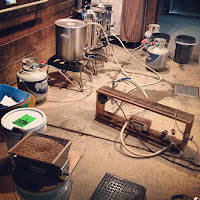 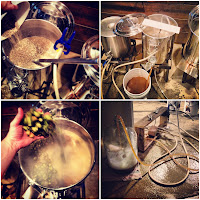 This was my first time home brewing at a new location in years. I had really developed a rhythm at my previous residence. I brewed almost one hundred and sixty batches over the three years I lived at "the federal". Currently, I'm setup in my families old horse barn (but my wife and I have a house under contract and I'll move brewing operations to the garage if all goes well with closing). The barn has a floor drain, which is very helpful in any brewery space. My old setup was very basic. I had one nice stainless vessel with a false bottom (later added a keggle for multiple batch brew days) that acted as mash tun and kettle. A cooler hot liquor tank that held the water that was heated up in the one stainless vessel on the one burner (added a second burner for multiple batch brew days). I'd mash in then runoff into buckets. Clean out the mash tun and it would become the kettle. I loved this setup. It worked and produced some great (and not so great) beers. During this time I would double, triple, and even quadruple brew (in fourteen hours) in a day. It was insane, an obsession, a time of focus and creativity. Nearly everyday, either before or after work (which was brewing professionally) I would either brew, rack, bottle, keg, or check gravity and carbonation on what was at least a dozen batches in process at one time or another. Part of me misses those days while I am starting a brewery. I'd much rather be brewing than writing business plans, projections, and proforma's. Alas, it all has to be done so that one day the creative chaos at the federal will become the beers of Burlington Beer Co. 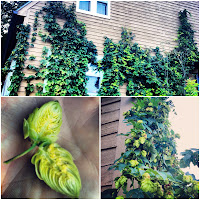 The new pilot brewery equipment for Burlington Beer Co. is an upgrade. Larger mash tun and kettle. A new third burner. March pump. Heat Exchanger, In-line aeration and temperature gauge, and fermentation temperature controller. It's crazy having all this equipment at home. It's standard operating equipment at commercial breweries and I used them everyday to brew commercial beer, but it was kind of weird to use it all at home. I definitely carried less water with the new equipment compared to my old setup. Overall I'm very happy with the new pilot brewery. No real issues with the equipment. It all worked well and how it was supposed to. I'm really excited about dialing in this setup. 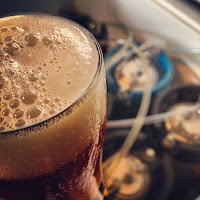