Last summer I entered a bunch of beer's into the Delaware State Fair as part of a "To Style Series" where I shared the score sheet feedback and judges comments for each beer. My low gravity brown ale even won best in show over higher abv (sweeter) beers. The most fascinating part about the feedback was when I entered the same exact beer into similar categories and received completely opposite comments/reviews for a few (ie: too thin-full body or not enough malt complexity-great malt complexity) of the beers. Which I found kind of hilarious and sad. I think the number scale for BJCP is completely arbitrary. Neither the World Beer Cup or GABF use any type of number scale. A beer is either good, stands out on that day and moves on, or it doesn't. I still think it's a good idea for home brewer's to enter their beers into competitions, but take the results with a grain a salt. Some of the best selling craft beer's in the country have never won any GABF or WBC medals.

For this year's To Style Series I will be posting about a bunch of beer's I entered in the National Homebrew Competition. All of these beer's were also featured at my brewery in planning's inaugural tasting event where I presented sixteen different beer's to introduce Burlington Beer Co. The event went very well with over a hundred people stopping by to sample the beer's, an article in the local paper (Burlington Free Press) and featured on Beer Pulse. 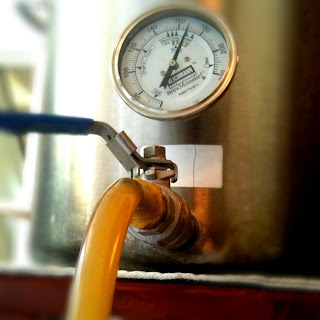 Overall Impression
#1- an excellent representation of the style, style appropriate balance towards hoppy bitterness, but with malt backbone, slightly higher carbonation would have thrown it over the top
#2- really enjoyable beer! body is a bit light for style, but malt/hop balance in flavor is good, bump up both a small amount, but overall, good job

For the tasting event I described the beer as: A medium to light bodied India Pale Ale that delivers a spectrum of hop aroma's and flavor's. Ranging from pine, citrus, floral, and earthy. We called it Another IPA so it's easy to order Another..

I may bump the gravity up a bit and/or raise the mash temperature in the future giving the beer more body, but overall I'm pleased with the results. The patrons at the beer tasting were very pleased with Another IPA as the whole case was gone, as well as it's darker cousin Dark & Dank (which I did not enter in the NHC because there isn't a category for dark IPA's).
Posted by Unknown at Monday, May 21, 2012

Email ThisBlogThis!Share to TwitterShare to FacebookShare to Pinterest
Labels: IPA, To Style Series