For my brewery in planning Burlington Beer Co. I wanted to create a beer for when people ask, "what's your lightest beer?". I wanted this beer to still be full flavored and something I would still like to drink. I came up with an idea to hybridize the bread-y malt complexity, German hop varieties, and clean lager fermentation of a Vienna style lager with the hop levels for bitterness and flavor of California Common style "Steam" beer. I called this beer 'Peasant Bread' and for Burlington Beer Company's first tasting event I described it as: "A hybrid between a California Common and a Vienna Lager. With the hop bitterness of a Common and the bready malt character of a Vienna Lager. Peasant Bread is cold fermented with a lager yeast strain creating a crisp, hoppy, lager."

Hybridized beer styles don't usually do well in BJCP events, but since this was my first attempt at the idea for a new beer I wanted to get some feed back. This beer was entered into each of the respective categories of inspiration, category 3a: Vienna Lager and 7b: California Common. 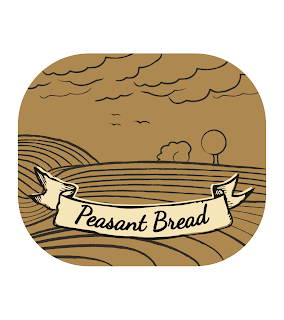 Flavor
#1- spicy hops hit first, should have more balance toward malt, firm bitterness may be a bit too firm, the malt is not enough to properly balance this beer
#2- crisp toasty malt sweetness with clean fermentation character and a dry finish, hop bitterness is in balance with the malt profile

Overall Impression
#1- I like it, but it's too aggressively hopped for the style, I'd also say that the bitterness isn't soft, consider using only noble varieties for this beer
#2- very nice clean drinking lager balanced toward malt as per style, exceptionally smooth and dry finish, slightly too light in color for the style and could use a touch more malt complexity

Overall Impression
#1- pleasant example of the style, balance of bitterness and malt is good, more late kettle additions would increase hop aroma
#2- maltiness is a bit low, but it allows showcasing of the hop character

The next time I brew this beer I'll be increasing the Vienna and Munich malt in the grist bill to increase the toasted malt flavors. I may also add some melanoidin malt, victory malt, or biscuit/aromatic malt as well to further increase the malt complexity. I'll also probably lower the bitterness, but increase hop flavor and aroma. I found it kind of hilarious that one judge was sure he was tasting and smelling Norther Brewer hops, which are traditional in California Common style beer when no such variety was used. Delta hops do provide a nice earthy and herbal flavor similar to Norther Brewer hops, which is why I used them. The hybridized beer idea worked, but as usually, can always be better.
Posted by Unknown at Sunday, May 27, 2012