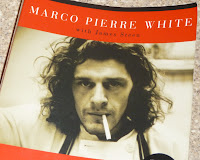 The brew is a Belgian style Double White brewed with Hot Chilis, Coriander, Oranges, Lemon peel, and Red pepper berries. Get it, White Heat. Never homebrewed with chilis but have had a few beers brewed with this ingredient. Interested to see how and where it burns through this beer. Simple grist bill: pale malt, wheat malt, and flaked oats. Step mash, mashed in at 145 degrees and rest for fifteen minutes. Raise temp to 156 degrees and rested for thirty minutes. Finally mashed out to 168 degrees. Adding all the spices, chilis, and citrus with five minutes left in the boil. The yeast will be 2nd generation from the Tangerine Wit I brewed recently. The yeast was a blend of White labs Wit WLP400 and Safbrew T-58. It was a great brew day.
Posted by Unknown at Monday, November 02, 2009