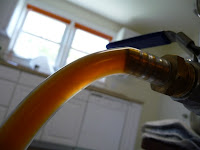 Been over a month since my last post. I took a little home brewing hiatus. Went home for a week and a half. With only a few weeks left of summer I'm starting to think about the last bbq's of the season so I'm going to brew a German inspired rauchbier today. The BJCP style guidelines say this about the history of the style. "A historical special of the city of Bamberg, in the Franconian region of Bavaria in Germany. Beechwood-smoked malt is used to make a Marzen-style amber lager. The smoke character of the malt varies by maltster; some breweri 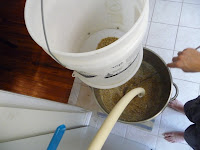 es produce their own smoked malt"

Traditionally the Germans used lager yeast to make classic rauchbier but since I can't brew lagers at home right now I'm going to be using the Wyeast 1007 German Ale yeast and ferment it cool, lower than 65 degrees. Also I'm using the Briess cherry wood smoked malt instead of the traditional beechwood rauchmalz. Fairly simple malt bill with pale malt, smoked malt, amber malt, aromatic malt, munich malt, melanoidin malt and a dash of chocolate wheat malt. Very light hops, just enough to balance the malt sweetness. Smoked bacon is the flavor I'm looking for today. Great brew day. Good to make a five gallon batch again. Got a new toy. An aquarium pump aeration setup. Worked great, only drawback was the foaming over. Just unplugged for minute and all was well. Nice to see oxygen getting dissolved into the wort. This is the first time I've been able to aerate my homebrew. That little stone chugs right along.
Posted by Unknown at Saturday, August 15, 2009