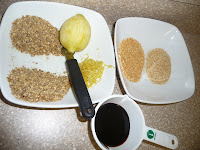 A black white beer. The idea of the beer doesn't make sense, but Quebec brewery's and the Bruery out of Orange County, CA have made sense of what this style can be. To the eye the beer in the glass appears to be a porter or stout, until the aroma sur 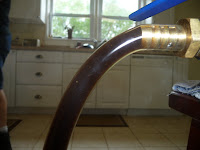 rounds you with the Belgian citrus and coriander. Some confusion and intrigue the first time you try this beer. The taste is dry like the whiter version but with some more body. The dark malts don't overpower this style but play a supporting role to the lead roles of citrus and coriander of the classic white beer. The crystal and dark malts create a chocolate covered orange effect. In this batch we used pale and wheat malt. As well as crystal, aromatic, and dark munich. The color was achieved with debittered belgian black malt and chocolate wheat. Some molasses was added for color and flavor. Lightly hopped to not overtake the spices and malts. A great summer beer that doesn't look lik 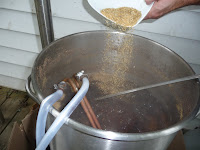 e a summer beer. A collaborative recipe between myself and fellow brewer and master mead maker Jon Talkington of Brimming Horn Meadery. We used lots of spices and added more as we tasted the wort during the process. Both being surprised by how much the darker malts masked the normally poignant flavor of white beer, citrus and coriander. Cooled to 70 degrees in thirty five minutes and pitched Fermentis Safbrew T-58 dry yeast.