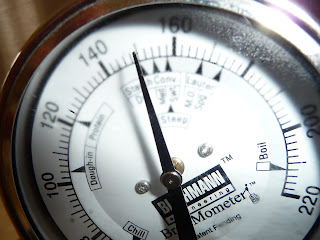 Brewed in the new place this last weekend. Late on the update due to no internet at home yet. Very successful day brewing. Improvised a gravity system using the fridge and a stool. As you can see in the picture below.

I decided to brew a Hefeweizen style beer. Spring is just around the corner and a nice bavarian style wheat beer is a great seasonal. The wheat malt adds a dry, crisp character when used. Wheat malt also creates a nice rocky head. The Hefeweizen style uses unique yeast strains that can give the beer a varying amount of banana, clove, and bubblegum flavors. The color is a pale straw yellow to golden. There are a few different kind of weizen beers. Hefeweizens that are Mit Hefe (german for 'with yeast') or Krystal. Which mea

ns a clear wheat beer. There is also a Dunkelweizen. Which is a Hefe but with some darker malts to give a pronounced malt character with some caramel and chocolate notes as well as a amber to red color. That's not even getting into the white or wit aspects of wheat beers. Save for another day...

For this Hefeweizen I did a single infusion mash at 151 degrees for forty five minutes. Commenced vorlauf till the wort became clear. Smooth runoff even with all the wheat malt. Sparged with 170 degree water and collected seven and a half gallons. Knocked out around five gallons into the fermentor. Added the yeast and it was fermenting by the next morning.

Email ThisBlogThis!Share to TwitterShare to FacebookShare to Pinterest
Labels: Hefeweizen