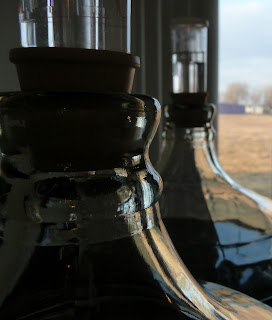 Bottled some home brew today. A classic American Pale Ale, brewed and dry hopped with Cascade. Also bottled an Oatmeal Stout. Both beers tasted pretty good during bottling. The pale is still a little astringent due to the heavy hop bill . It should mellow out during the bottle conditioning . It's a low abv pale but the hop backbone should give this pale some shelf life. The stout has a great nose of mocha espresso. The large quantity of oats in the grist bill is lending a nice body. I'll check back with these beers in a couple weeks once they've carbonated.

After bottling home brew it's always such a great feeling seeing all your beer packaged away under each crown that you hand sealed. The moment is filled with accomplishment, pride, and anticipation for the tasty little jewel you just crowned. 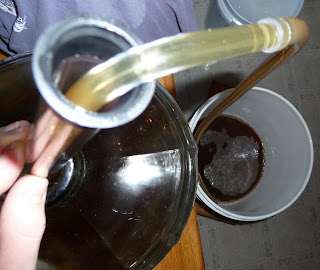 Bottling home brew definitely has a romantic notion to it. There is the greatest sense of attachment to every step of the process. Don't get me wrong though I am dreaming of a kegerator and force carbonated home brew. It won't have the same mystique as bottle conditioned home brew and personally I think the flavors are better in bottle condition than force carbonation. It's funny you pop each bottle like it's your child. Knowing that there is only so many and then that's it. Try to repeat the recipe and the next batch may not have the same pinnacle of flavors that the batch you were trying to replicate possessed in the first place. Ah the endless paddle for the consistent perfect pint. 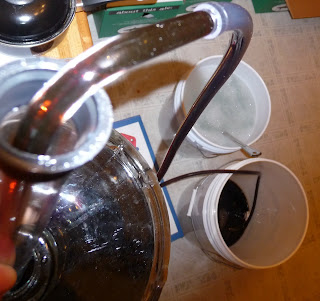 Next week I'll be moving into a house that has much more space for home brewing. Finally the space again for the amount I want to brew. I'll be purchasing a freezer to convert into a fermentation station that will act as a cooling jacket does on professional fermentation vessels. The freezer will be plugged in to a digital thermostat that I can set for whatever temperature I desire for fermentation conditions. Finally controlled fermentation's at home. Did I hear someone say "lager"? 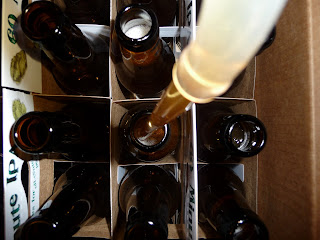 Yielded forty one bottles of pale and forty seven of the stout. No big messes, no equipment failure, everything went smooth. Yup, a successful bottling day.

Email ThisBlogThis!Share to TwitterShare to FacebookShare to Pinterest
Labels: Bottling