Berliner style Weisse beer is from a by gone era, nearly a style forgotten by time. The BJCP style guidelines talks about the history of the style as, "A regional specialty of Berlin; referred to by Napoleon's troops in 1809 as the Champagne of the North due to its lively an elegant character. Only two traditional breweries still produce the product." Thankfully this refreshing, tart, session beer is making a comeback. 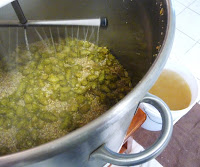 In 2008 at the La Fete Bieres & Saveurs in Quebec and I had the privilege of sampling my first Berliner Weisse that happened to be brewed by Hopfenstark. Weighing in at 3% I was amazed at the complexity in such a "small" beer. The grainy, malty background held up with a lactic tang was a shock to my palette. I had recently been indulging in the new, to me, world of sours and this was a wonderful surprise. Up until that point I had only read about this style of sour beer and after a couple of bottles were greatly enjoyed I knew one day I would attempt creating my own Berliner Style Weiss beer.  I've had a few more examples of this style since 2008 but two of the best have been home brewed. One by Jamey Barlow which was spot on and the other by Nate Zeender of DesJardin Brewing which was technically a Kvass style beer, it could have easily passed for it's wheat based cousin. 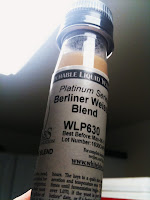 Since the grist bill is 48% un-malted wheat, 38% base six row malt, and 14% flaked oats I performed a step mash (122*f, 149*f, and mashed out hotter than normal to 185*f, for run off purposes) to break down and convert the un-malted wheat. The high diastatic power of six row malt compared with two row malt will also help to convert the un-malted wheat. I'm using the un-malted wheat instead of wheat malt for a softer mouth feel and I'm trying to get closer to the original grains flavor as possible in the finished beer, very wheaty. Also mash hopped this beer with some locally grown Willamette whole leaf hops. Run off was slow but only had to reset the bed once. After collecting the wort I brought it up to a boil then turned the heat off. Added a little crushed coriander, cooled the wort, knocked out into a carboy,and pitched the yeast blend. The yeast blend was White Labs WLP630 Berliner Weisse Blend. Looking forward to the results many months from now.
Posted by Unknown at Sunday, May 08, 2011