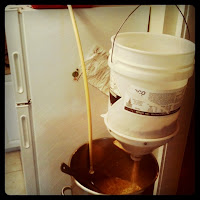 This beer was brewed for a unique home brew competition created by Peter Kennedy of Simply Beer called Iron Brewer. Iron Brewer brings together home brewers from across the country to create a beer from secret ingredients. Like Iron Chef which has one secret ingredient to showcase in all the dishes, Iron Brewer presents three secret ingredients for each brewer to showcase in one beer. After winning the third round with a Bourbon Infused Vanilla Bean Robust Smoked Brown Porter featuring Vanilla, Smoked Malt, and Centennial hops I was invited to compete against the winners of all six rounds for the Iron Brewer championship. In the Championship Round we had to feature Chili Pepper, Crystal 120, and Horizon hops. 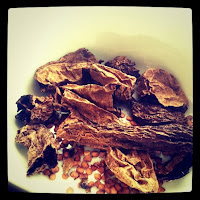 When I first heard the ingredients I was surprised by the choice of chili peppers but the challenge of brewing a beer that also featured a strong hop character seemed like a difficult pairing. Then I decided I would just roll the dice and go for it and brew a vibrant red IPA (the red representing the heat of the chili peppers, and the color achieved from crystal 120) with chili peppers.  I didn't know how the hops would meld with the chili peppers flavor and heat. Having never used the Horizon hop variety before I wasn't sure of there flavor either. From what I read they were spicy and earthy. So that was encouraging. Nothing to crazy about the brewing process except I added three quarters of an ounce of re-hydrated and pureed chipotle chili peppers at end of boil to lay a foundation of chili flavor and what I thought would be enough heat. Here's the recipe. 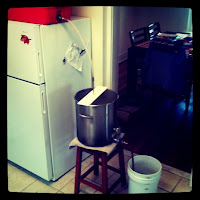 After fermenting with an American Ale strain (Safale US-05) and racked to secondary I realized the heat wasn't where I wanted it to be so I created a red chili pepper tincture in vodka to boost the heat. The beer was dry hopped with two ounces of Horizon hops and keg'd. At which point I added the chili pepper tincture adding the heat to this hoppy red ale. After force carbonating I used a blichmann beer gun to bottle.

You can listen to the tasting of the championship round here, but long story short, I won! The Championship round had some really excellent beers, especially Jim Lavin with a chocolatey chili pepper ale and Jonathan Moxey with a delicious Red Chili IPA. After winning all I could say was "my jaw is dropped". It felt great to be recognized by my peers to have brewed the best beer that day. Looking forward to defending my title in the Championship Round of Batch #2. 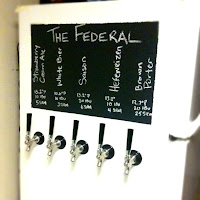 8/28/11 Update: With the prize winning money from winning batch #1 of Iron Brewer I built a five tap home brew draft setup.  Nice to be done with cobra party taps at home and pour a pint from a stainless steel faucet. There were a few bottles leftover of this batch so I decided to enter this beer into the Delaware State Fair Home Brew Competition. There was a little age on the batch (5 months) but I thought why not, it fits into category 21a Spice, Herb, or Vegetable Beer.


Judging
Aroma
#1- Fresh herbal American hop nose. Pepper is a secondary aroma. Malt as well in the background with some caramel malt to support.
#2- Great classic amber ale aroma with hints of pepper hanging out.
Appearace
#1- Dark reddish-amber color. Creamy off white head with good retention.
#2- Color is deep amber. Great head retention.
Flavor
#1- Malt up front followed by hops and a bit of chili pepper at the finish. Some berry like fruity esters add a layer of complexity. Balance swings from malt to pepper spicy to hoppy.
#2- Sweet malt up front that fades as you wait for the slow creep of heat.
Mouthfeel
#1- Medium body and carbonation. Carbonation adds fullness to mouthfeel. No alcohol warmth, but capsaicin warms the finish. Some creaminess. No astringency
#2- Carbonation is great. Hot on the finish.
Overall Impression 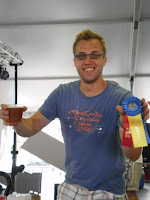 #1- A nicely balanced and well made spice beer. The base style comes through nicely and chili peppers are not overdone. A bit more of a malt balance would push underlying beer closer to the style.
#2- I like the blend of malt and chili peppers. I just can't help but wish it had more hop character.
#1- Grand Master III        36/50
#2- Professional Brewer   37/50
Overall 37/50---Very Good (30-37)
First place in category winning Best in Style
Posted by Unknown at Wednesday, April 27, 2011