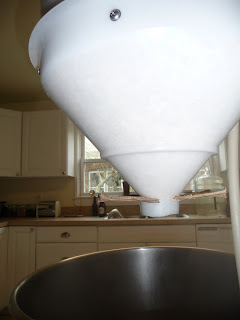 Grist case is working well. To the left you can see where the funnel is attached to the bucket with the bottom cut out. I drilled holes in the bottomless bucket and funnel then attached the funnel with nuts & bolts. The knife valve is simply the funnel shortened and cut into on both sides to create a slot that a piece of cardboard, for now, is used as the knife valve. I will be making a piece of wood to serve this purpose that will have a hole cut in the middle to better control speeds.


Today's brew was a countryside style farmhouse Saison. I used four grains to form the grist bill. Barley, wheat, oats, and rye. Also used some honey to dry out the mouth feel. Mashed in at 149 and rested. Lately I've been mashing out to 168 with great results. By doing this you denature the enzymes and lock in 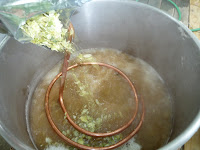 the sugar profile you've created. The enzymes stop chopping chains. The hops I used were two variety of Golding hops. East Kent Golding and Styrian. These hops are part of what brewers call "noble" hops. Basically meaning they have a long and storied pedigree in brewing lore. The target gravity is 15.5 plato, and if the yeast behaves should get this beer to about 6.5 % abv. This goes toward the strong end of the saison style. Session versions are great, but are usually made with some type of funk character from Brettamyces. Which at this time I am not ready to introduce to my home brewery.

Here is what wikipedia has to say about Saison. "Saison (French, "season") is the name originally given to refreshing, l 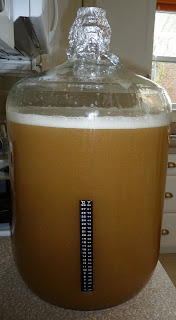 ow-alcohol pale ales brewed seasonally in farmhouses in Wallonia, the French-speaking region of Belgium, to refresh farm workers during harvest season. Modern-day saisons are also brewed in other countries, particularly USA, and are generally bottle conditioned, with an average range of 5 to 8% abv, though saisons at the more traditional 3.5% strength can still be found. Although saison has been described as an endangered style, there has been a rise in interest in this style in recent years, with Saison Dupont being named “the Best Beer in the World” by the magazine Men's Journal in July 2005.
Historically saisons did not share identifiable characteristics to pin them down as a style, but were rather a group of refreshing summer ales. Each farm brewer would make his own distinctive version. Modern saisons brewed in the USA tend to copy the yeast used by Brasserie Dupont, which ferments better at blood warm temperatures (85 to 95 Fahrenheit) than the standard 65 to 75 Fahrenheit fermenting temperature used by other Belgian saison brewers."

My saison started fermenting nicely within 5 hours after pitching. As of now temperature is in the low 70's. Picture to right was taken 24 hours after pitching. Small krausen forming and lots of carbon dioxide production.
My farmhouse saison has since stalled. I pitched dry Safbrew yeast and aerated. There is activity from the airlock but no visible krausen. Wait and see. OG was 14 plato and is currently at 12.8 plato. The yeast prefers very warm temeratures, up to 95 degrees.
Good news. The saison has fermented out. Checked tonight and the gravity is 2.6 Plato. This puts the beer at 6% abv. It's a big relief to have the batch ferment. I'll rack to 2nd fv tomorrow and condition for a week before kegging. Decided to dry hop with one ounce of Czech Saaz hops.
Posted by Unknown at Saturday, May 02, 2009

Email ThisBlogThis!Share to TwitterShare to FacebookShare to Pinterest
Labels: Saison