Smoked malt is a traditional brewing ingredient. At one point most malted barley was smoked. Not because people meant to make a smoked flavored malt barley, but at one time all malts were in-directly smoked during the kilning process whether they liked the smoke flavor or not. The process of kilning the malts was done over fires of different types of wood, which in itself created unique flavors. Today I'm using a malt that was smoked over Cherry wood. Un-smoked malted barley is a new invention of the 19th century.

hat they have to say about their malt:"There’s nothing like brewing a beer with smoked malt. Smoked malt delivers exceptional brewing creativity, making it possible to develop complexity in Scotch Ales to rich, robust smoky flavor in Rauch Beers and Porters. And now, with Briess Smoked Malt, you can brew all that and more without infusing astringent, phenolic harshness in your beer. That’s because Briess Smoked Malt delivers an intense yet smooth, sweet, smoked malt character not available in any other commercially available smoked malt, and that lends itself to use in many beer styles."


From Wikipedia, they have this to say about smoked beer history:
"Drying malt over an open flame may impart a smoky character to the malt. This character may carry over to beers brewed with the smoked malt. Prior to the modern era, drying malte 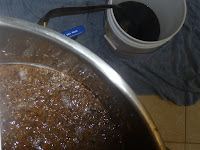 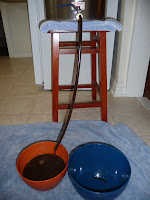 n direct sunlight was used in addition to drying over flames. Even though kiln drying of malt, using indirect heat, did not enter into widespread usage until the industrial era, the method was known as early as the first century BCE. Also, there have been various methods over the years of preparing cereal grains for brewing, including making beer from bread, so smoked beer was not universal. However, it is known that beer made from malt dried over flame was common in England from the 16th to the 18th century. Beginning in the 18th century, kiln drying of malt became progressively more common and, by the mid-19th century, had become the near-universal method for drying malted grain. Since the kiln method shunts the smoke away from the wet malt, a smoky flavour is not imparted to the grain, nor to the subsequent beer. As a result, smoke flavour in beer became less and less common, and eventually disappeared almost entirely from the brewing world." 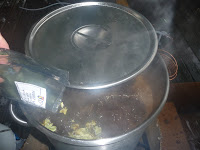 Good brew day today. Started off sunny with a huge storm rolling in by the time I started the boil. I'm using whole leaf fuggle hops today. I really enjoy there earthy spice in darker beers. There is 15% smoked malt in the grist which should give a slightly noticeable smoke character but not overpowering. Overpowering would be upwards of 60% smoked malt in a darker beer such as a porter, using this specific smoked malt at least. Well, I'll pick up ten pounds of it next weekend and see if 100% of this smoked malt is to overpowering. It's five lovibonds so it should make a nice pale cherry smoked slim jim.
Posted by Unknown at Monday, May 25, 2009