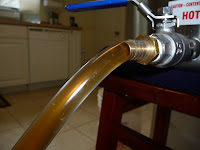 With my keg setup coming together I need to start filling the taps with quaff able beers. Today I'm brewing an amber ale, American style. American because I'm using an American dry yeast strain (chico) and the classic American hop, Cascade. Cascade is most widely known in the beer, Sierra Nevada Pale ale. Cascade is probably the most recognizable hop today. You can smell it in the aroma from an arms length away. It's a very grapefruit, citru 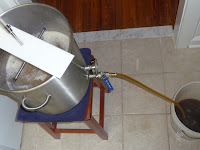 sy hop. There are South American variety's of Cascade that don't have really any of the 'classic' Cascade flavor at all though. They are more similar to the noble hops of Germany, such as Hallertau. Showing how much the terroir more than the variety affects all agriculture.

Amber ale brew is going well. Nice runoff, collect six and a half gallon. Should evap 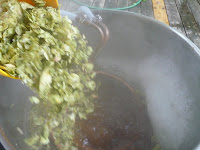 orate about a gallon which will bring my batch size down to about five and a half gallons. Target gravity of 14.5 plato. Used Crystal 80 and Special B for color. For bittering I'm using galena hops, and of course for aroma and flavor Cascade hops. Happy 5th of May. 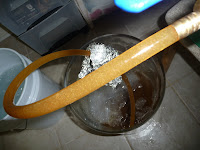 When rack to 2nd twas dry hopped with 2 oz Cascade. Aged for another week and kegged.