Every spring, Vermont maple trees provide a bounty of maple sap that is boiled into maple syrup. In this case, beer.  Some friends had some extra sap and suggested I brew with it. Being as I have yet to use maple sap I was very excited to brew with the sap.

Instead of using sap for the strike water the sap was poured into the kettle and brought to a boil. The sap started at three degrees plato (1.012sg) fresh from the sugar maple tree. Friends Pete and Kimber supplied the sap and helped brew the beer. They we're thinking porter, I was thinking amber ale. We decided on brewing an amber porter. I really like using husk-less roast barley and roasted wheat for beers where you want a clean roasted malt flavor that doesn't overwhelm the rest of the recipe. I'm hoping to taste some maple flavors in this batch. Munton's pale malt for the base. Weyermann carahell and cara red for body and color. Chocolate Wheat and Carafa II for color and flavor. Bittered with Bramling Cross. Flavored with Czech Saaz. 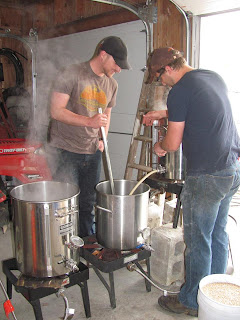 While mashing in the amber porter I reduced the sap from five gallons to two gallons in the time it took for the collected wort to be combined with the boiling sap. The sap measured five and a half degrees plato (1.022sg). After pouring the wort in with the sap I started a ninety minute boil. Adding hops with sixty and ten minutes left in the boil. Fermented with US-05.
Posted by Unknown at Thursday, May 30, 2013