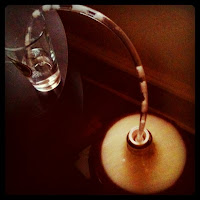 An American style Pale ale 100% fermented with an isolated wild yeast called Brettanomyces Bruxellensis, instead of traditional brewers yeast Saccharomyces Cerevisiae. A hop bill like an American Pale Ale using Amarillo, Chinook, and Centennial hops for a classic grapefruit, pine, citrus flavor hop bite but with a yeast that will impart unique flavors.  Classified under the broad banner of American Wild Ales, one of the most exciting styles being brewed across the country.  This pale ale of sorts is meant to be dry, refreshing, and hoppy, but with a yeast character to add complexity, not overpower the beer.  Planning to keg this beer fairly young so it only has a light funk character that's (hopefully) leaning toward tropical fruit flavors from the yeast to interact with the citrus hop notes.