Today's brew is for the Iron Brewer competition where three mystery ingredients are picked and each brewer much concoct a beer to showcase these ingredients. So far there has been two rounds of six brewers and this is the third round of six. The three ingredients this round are Smoked Malt, Vanilla, and Centennial

hops. With the hops adding a big citrus, grapefruit flavor I'll be using the hops for bittering because I'm not sure how smoke,vanilla, and grapefruit go together in beer, but grilled grapefruit with vanilla foam sounds good. Anyway it's very exciting to be invited to brew in this competition. The competition is steep this round with home brewers who brew damn good beers. Really looking forward to try what everyone brews up, but especially Slovak Brewer Stephen Freshnock's Belgian 'house smoked' Golden ale. He is by far taking the biggest risk while the rest of us are being 'safer' and brewing darker beers (3 porters, a dunkelweizen, and my brown ale). The dunkel is a pretty bold move as well though. 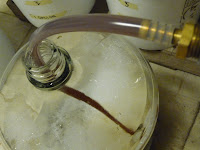 Allez Brasser! With these three ingredients I decided upon a Robust Brown Ale as a base. A baltic brown porter of sorts. With 37% of grist bill being Cherry Wood Smoked Malt to create a sweet bacon malty backbone. A halved Vanilla bean will be added to secondary after infusing in Bourbon for a week. Centennial hops will be used for bitterness to balance out this burly brown ale. Click here for recipe.
Posted by Unknown at Saturday, August 21, 2010