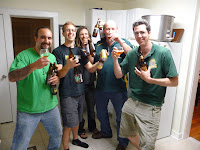 The International home brewing community is strong. Around the world home brewers get together to share brew, ideas, and stories. Last Wednesday night was one of those nights. A group of Australian home brewers came to my house to home brew and drink. How all this came together is somewhat explained in this newspaper article. Out of the Times Union in Albany, NY. http://www.timesunion.com/AspStories/story.asp?storyID=835847&category=&BCCode=&newsdate=8/28/2009&BCCode=&newsdate=8/28/2009. So, Ross and Dave express some interest to Jim Azotea, the former president of the Saratoga home brew club(my first home brew club http://www.thoroughbrews.com/), that they want to go to DFH. Since, I am reluctant to say this, a brewer there Jim emailed me Tuesday if they could come to the mid Atlantic to home brew and get a tour 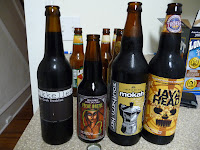 . Of course my response was yes. The opportunity to hang out with home brewers that have the wealth of knowle 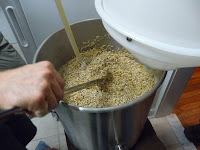 dge that Ross, Dave, and Matt have was priceless. We started brewing around 11:00 at night. I think I finished brewing around 3:30 in the morning. Not sure, but there is a carboy full of smoked porter from that night that doesn't taste too bad considering the circumstances. The circumstances were the tasting of quite a few brews. I don't think many were under 8%. Needless to say the night lasted till the morning. I learned a new term. To take a pint to the head, to skull it. For example "hey, I bought you a pint, skull it". Ross, 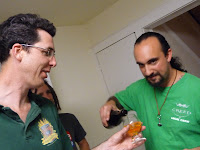 Dave and Matt, you can crash here anytime and I'll be looking you guys up when I'm in Brisbane. Hey Dave send me some of the pics you took. Cheers! 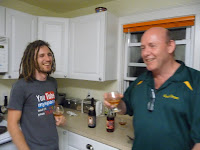