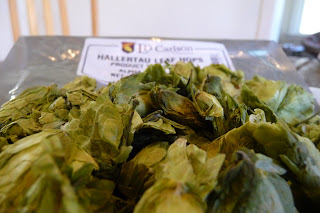 Busy day home brewing this Easter Sunday. Was mashed in by eight thirty in the morning. Using one hundred percent dark Munich malt in the mash and hallertau whole leaf hops in the boil. Using classic German ale yeast. Inspired by the Alt (old) beers of northern Germany. They are called Altbiers because it refers to the old style of brewing, meaning making ales. Once the Germans "discovered" a "new" yeast strain in their caves they all but forgot their ale brewing history. Most Altbiers today are made in Dusseldorf, Germany. These beers are clean yet robust with a complex aroma of ric

h malt and noble hops. Overall a balanced, malty yet bitter, smooth well attenuated ale. Best examples are found in the Altstadt (old town) section of Dusseldorf in brewpubs. A variant of the style is a Sticke (secret) Alt. Which is richer, smoother, and more complex. Also stronger in abv and stored for longer to round out the edges. 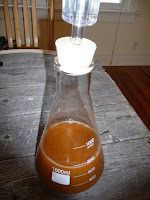 Using some of the wort from the batch today to get a yeast starter going for my up coming Trappist Ale. I need to propagate the yeast because the starting gravity is so high in the recipe and the cell count in the smack pack is only enough for 1.060 specific gravity wort, that the yeast would go into shock. Causing off flavors and low attenuation. In the Trappist Ale I'll be using pilsner malt, wheat malt, flaked oats, honey and French strisselspalt hops. Never used these hops before, looking forward to using them. I'm using a flask to propagate the yeast. Flasks are easy to clean, sanitize, and pour into a carboy using small funnel. 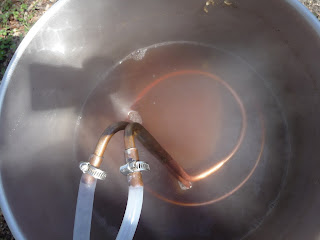 Overall good brew day. Start to finish the batch took five hours. A couple more things to clean up and tinker on though. To the right is a picture of an immersion wort chiller. Works well enough, cooling the wort under twenty five minutes. This afternoon I'll be building a raised bed for a small hop garden and enjoying some home brew. Happy Easter!
Posted by Unknown at Sunday, April 12, 2009

Email ThisBlogThis!Share to TwitterShare to FacebookShare to Pinterest
Labels: Altbier