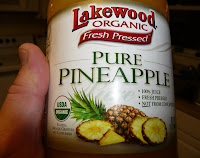 One way to stretch a brew day is to brew a big batch of lower gravity wort and split the batch between smaller fermentors and add a different twist to each fermentor (or keep one for a control). Whether it's using different yeast strains or adding different ingredients such as spices or fruit to the different fermentors it's a great way to experiment.

For this batch I brewed a large volume of golden wort with a starting gravity of 12.6*P (1.051sg) and split the batch three ways. One fermentor with pineapple juice, another with carrot juice, and a third with a tropical fruit juice blend. Pitching different blends of wild yeast strains into each fermentor. This pineapple wild ale is fermented with brettanomyces lambicus and brettanomyces bruxellensis. 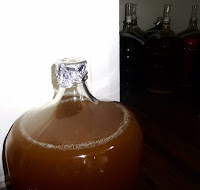 Brewing alternative yeast beers has been a lot of fun. The only drawback is the much longer learning period per batch. More traditional yeast fermentations have much quicker turnarounds allowing the brewer to evaluate the beer much sooner. Thus learning more rapidly about brewing. No matter what the size of a batch a brewer learns something from every batch to make the next one even better.

Currently I now have sixty five gallons (would only fill one oak barrel) of beer in eighteen fermentors at different stages of souring with the oldest being one at the time of this post. Tasting along the way as the flavors have developed and matured has been fascinating. Beginning to understand when flavors start developing and the impact of different ingredients and what they contribute to the overall impression of each batch. All while being amazed at the visual seemingly big bang theory like primordial growth of a pellicle reminds me of the deeply interwoven history of humans and fermentation as food preservation for survival.