The idea for this batch is to brew a Vienna style Lager but increase the hop bill to IPA levels. While still using traditional German Noble hops Hallertau and Tettnanger. This batch will be fermenting outside in the cool early winter temperatures in the mid 40's to mid 50's. Perfect for fermenting lager beers. I'm brewing this beer to discover the flavor of an aggressively hopped German style beer. When Americans travel to Germany I've many times heard that the beers were great but that everyone missed the flavor of hops. Most German beer styles are barely hopped compared A 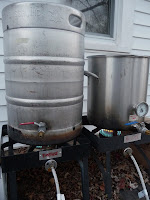 Email ThisBlogThis!Share to TwitterShare to FacebookShare to Pinterest
Labels: Lager