A low gravity full flavored session ale has become a favorite 'style' of mine. It's also gaining popularity by the greater craft beer community. In January 2009 Lew Bryson started The Session Beer Project a blog to promote session beer. Also this last year Notch Brewing was founded, a brewery that will only brew beers below 4.5% abv. In a time where 6% abv beers have become the new standard for 'session' beer in America, I'd rather be quaffing a flavorful beverage under five percent that is full flavored. Today's batch of beer will accomplish this by having a thirst quenching toasted malt flavor with a spicy, herbal flavor from blending Styrian Golding, Perle, and 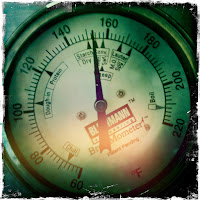 Hallertau Hersbrucker hops into the beer. For experimentation I'll be splitting the batch between two carboys pitching American Ale yeast Safale US-05 into one and Safale T-58 in the other.