The attention to detail will be hyper focused on the task at hand. Which is to brew two batches of my American Pale Ale recipe that placed 2nd in First Round of National Homebrew Competition in Category 10 'American Ale'. This means it was the 2nd best 'American Style' ale out of the 76 entries in that particular category. There are three sub category's in category 10, they are as follows: 10a Pale ale, 10b Amber ale, 10c Brown ale (further reading, BJCP style guidelines). So, all of 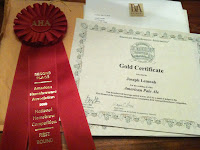 the 76 entries of 'American style' beer were judged against each other on which was the, 'most true to style'. The winners of category 10 were an Amber ale(10b) that received 1st and a Brown ale(10c) receiving 3rd. Meaning of all Pale ales(10a) entered into Northeast region that, on the day of judging, mine was 'best' pale ale entered by getting 2nd. After burning my candle on both ends for quite some time this is a nice 'pat on the back' for all my hard work. I really enjoy crafting delicious brews whether using strange grains, herbs & spices, and wood aged beers, but to place with an American style pale ale means more than my other beers I entered into previously mentioned experimental categories. The fact the judges recognized on that day the 'quaffability' of my take on what has become a flagship style in the bedrock of this New American Craft Brewing Renaissance is an honor. 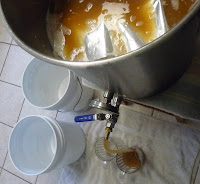 Since I don't have anymore of that batch of pale ale around I'll be brewing more to send to nationals. The batch I sent in was brewed at the end of January and was mostly a prop batch for what was an upcoming Imperial Coffee Stout. I didn't even blog about it in between a Schwarzbier and a Rye'd Pale ale. I did try new hopping technique which is a combination of hop additions that I've found work well. Basically I 'first wort' hopped during run off. Which is the practice of adding hops to your wort which weaves together a unmatched hop flavor (first wort technical reading). I then added just enough bittering hops to balance and didn't add another hop addition the rest of boil. With my theory being, "if I'm going to dry hop the beer, why not just move late kettle additions to dry hops as well." So I added the ounce of what would have been my zero minute hop addition and added them on day 2 of fermentation. After fermentation I racked to 2nd and dry hopped a second time the way I do normally. It was then bottled in the middle of February and two months later at the end of April a couple of BJCP judges enjoyed it. My friends and I couldn't wait that long, we enjoyed the whole batch much sooner.
Now that I'm brewing up a couple batches that will be in bottle a little over two weeks instead of two months before they are judged I'm wondering if I should try and reverse engineer the hop levels to what they may have been after two months in bottles. As many hop heads know, hops are best fresh, and that hop flavor fades and fades fast. I'm probably over thinking it, but I'm going to brew one batch exactly the same and the other with a 10-15% decrease to the overall hop bill and then decide later which to send to nationals.
Posted by Unknown at Friday, April 30, 2010